Reporter gene assays are used to study gene expression and regulation. The most common applications include the testing of cis-regulatory sequences such as enhancers and promoters, functional analysis of promoter single nucleotide polymorphisms, studying signaling pathways, and drug discovery. Chemiluminescent reporters often outperform fluorescent, colorimetric or radioactive reporters due to their inherent sensitivity, large dynamic range and ease of set up. In particular, the low background light inherent in luminescence results in a better signal-to-noise ratio (SNR). Such high sensitivity is the prerequisite for most High-Throughput Screening (HTS) methods, which rely on the use of high-density plates to rapidly measure a single parameter across a large number of samples.

In a typical assay, cells are transfected with a vector that contains the sequence of interest cloned upstream of a luminescent reporter, such as Firefly or Renilla luciferase enzymes. In transient transfection experiments, an internal control with constitutive expression is often added, either as part of the same plasmid or co-transfected on a separate plasmid, in order to normalize for transfection efficiency, cell viability and sample handling. This system is known as the Dual Luciferase Reporter (DLR) assay. The activities of Firefly and Renilla luciferases are measured sequentially from a single sample, based on the different substrate specificities of the two luciferases, which provides a convenient means to measure both test and control reporter activities.

We sought to design a reporter gene assay based on the DLR system and with the following requirements:

We present here an automated protocol that fulfills these demanding requirements by using two Biomek NXP workstations (Figure 1A) for transient transfection and for the DLR assay of synthetic promoter variants. We will show that, besides increasing throughput, using automation leads to reduced variability of measurements over a dynamic range of up to five orders of magnitude.

Two Biomek NXP workstations, one with a 96-channel head and one with Span-8 pipettors, connected with a servo-shuttle, are used for all liquid transfer steps (Figure 1A). In addition, the robotic system is equipped with orbital shakers and a microplate reader (SpectraMax Paradigm, Molecular Devices) served by the Span-8 gripper. This configuration made it possible to fully automate the assay, from cell transfection to luminescence readout.

All promoter constructs were cloned in the pGL4 Vector (Promega), which maximizes expression of Firefly and Renilla luciferases, while minimizing cryptic transcription factor binding sites. Firefly reporter was used to measure expression of test promoter variants, and Renilla was used for the control promoter (Drosophila pTRAN promoter). The GFP expression vector used to visualize transfected cells was a gift from K. Förstermann (Gene Center, Munich).

Drosophila Schneider 2 (S2) cells were cultured in serum-free Express V Medium (Invitrogen), supplemented with L-Glutamine (9%). 40,000 cells/well (each containing 110 μL of medium) were plated in 96-well plates (Corning) at passage 18. The cells were incubated within a humidified incubator at 25°C. Before transfection, Fugene HD (Promega) transfection reagent (diluted 16.2X) was mixed with the plasmid DNA (total concentration of 25.3 ng/μL) in water in four 96-well plates (4titude). We determined the optimal mass ratio between test and control plasmids to be 8:1 with our vector systems. The addition of the transfection reagent/DNA solution to the cells was then performed using the 96-channel head.

Readout of the luminescence signal

After incubation for 24 hours, the volume of the cell culture medium was reduced to 80 μL to increase luciferase concentration after lysis, and the cells were detached from the plate bottom by shaking. Subsequently, 2 × 20 μL of the lysed cell extract from each well of four 96-well cell culture plates was immediately added to two separate 384-well plates (AlphaPlates light gray, Perkin Elmer). Importantly, the plates were dark-adapted for 10 minutes before reading to reduce plate luminescent background. To each well of the first plate, we added 10 μL of One-Glo solution (Promega) containing a lysis buffer and the substrate for Firefly luciferase. The plate was transferred to the microplate reader and left for 10 minutes before measuring Firefly luminescence. The procedure was repeated with the second plate using the Renilla-Glo solution (Promega) to measure Renilla luminescence (for discussion, see below).

For gene reporter assays, cell transfection is typically performed transiently, i.e. without integrating the plasmid DNA into the host genome. A preferred method is chemical transfection, where reagents package the DNA plasmid in liposomes, allowing them to pass through the cell membrane. This easy-to-use method can produce high transfection efficiency, low cell toxicity, and reproducible results. High transfection efficiency is important for providing a high signal and good well-to-well reproducibility, thereby helping to minimize experimental variability. Although normalization with the control reporter significantly reduces variability, a homogeneous transfection over the plate further improves data quality and avoids creating outlier wells (e.g. wells in which the control signal is too low).

The main difficulties in automating the transfection procedure are the need for strict control of cell culture conditions (splitting, use of serum-free medium, monitoring of cell proliferation/apoptosis), and the hydrophobic, viscous nature of the transfection reagent. Because of its low stability in aqueous environments and its adsorption to plastic containers and pipette tips, the transfection reagent had to be pipetted without dilution and at low volumes (2.3 μL). We used the Span-8 pipettors with P50 pipetting tips for this step. In order to limit adsorption, the lipophilic reagent was transferred into individual borosilicate glass tubes in 96-well plate storage format (Figure 1B). Eight tubes were used in parallel to optimize pipetting time and limit adsorption onto the tip surface. This procedure led to high transfection efficiency (50-60%), with well-to-well variability below 20% in a 96-well cell culture plate format (Figure 1C).

Figure 1. Robotic system and automated transfection. A) One of the two Biomek NXP workstations with a Span-8 pipettor, an orbital shaker and a microplate reader. B) The borosilicate glass tubes used to contain the lipophilic transfection reagent. C) Confocal tiled images of 15 individual wells of a 96-wellplate containing S2 cells transfected with a GFP expression vector. The transfection efficiency was 50-60% and the well-to-well variability below 20%.

To save time and reduce the required volume of the substrate reagents of the luciferase enzymes, it was highly desirable to perform the DLR assay in a 384-well plate format. While transfer of the cell culture and transfection protocol from 96-well to 384-well plates was not feasible, we managed to obtain similar performance for the DLR assay in the two different plate formats. We therefore proceeded by transferring our samples from 96-well to 384-well plates for the luciferase readout (Figure 2A). This enabled us to reduce the time required by the DLR assay, and to reduce the volume of substrate reagent by a factor of 6.

During the optimization process, we tested different plates, vector systems, luciferases and control promoters in order to optimize the signal-to-noise ratio (SNR). It turned out that the quality of the 384-well plates used for the readout is essential for maximizing the SNR and minimizing crosstalk of luminescent light between adjacent wells. We found that dark-adapted light gray plates gave the best results, with a crosstalk < 0.05%.

Another critical parameter is the delivery method for the two luciferase substrate reagents. We originally tested a widely used DLR kit (Dual-Glo, Promega), which provides the substrate for Firefly luciferase (driven by the test promoter), followed by the Renilla luciferase (driven by the control promoter). With this kit, the substrate for Firefly is added first, and the corresponding luminescence signal is measured. The reaction is then quenched, and the Renilla luciferase reaction initiated simultaneously by adding a second reagent to the same sample. However, we discovered two different problems when using this approach:

First, although the crosstalk value of 0.05% would be negligible for most applications, it represents a significant source of error in our experimental design, where extremely strong and weak promoters can occur side by side in neighboring wells, with a dynamic range exceeding three orders of magnitude.

Second, we found that the quencher added before the measurement of the Renilla signal was only partially quenching the Firefly signal for the strongest promoters. This resulted in overestimated Renilla signals, leading to erroneous normalization of the data.

We successfully solved both issues by modifying the assay pipeline. The cells were first lysed in medium, and then split, using the 96-channel head, into two different light gray plates for separate readout by adding Firefly substrate to one plate and Renilla to the other (Figure 2B). We verified that this procedure adds no variability to the normalized data, compared to sequential activity measurements using the same solutions. This demonstrates the high pipetting accuracy of the multichannel head. In this procedure, no quencher needs to be added before assaying the Renilla signal, which leads to a twofold increase in Renilla luminescence signal. Moreover, to address the cross-talk issue, we performed two readouts of the Firefly plate: the first readout after adding the substrate (post-incubation), and then a second measurement after pipetting out the high-signal solutions of strong promoters and replacing them with another quencher (Nile Blue) (Figure 2C). This procedure completely eliminated any crosstalk. To normalize for the slight loss in luminescence signal between the two readouts, as well as for normalization between different runs, different control promoters are systematically used as plate controls. 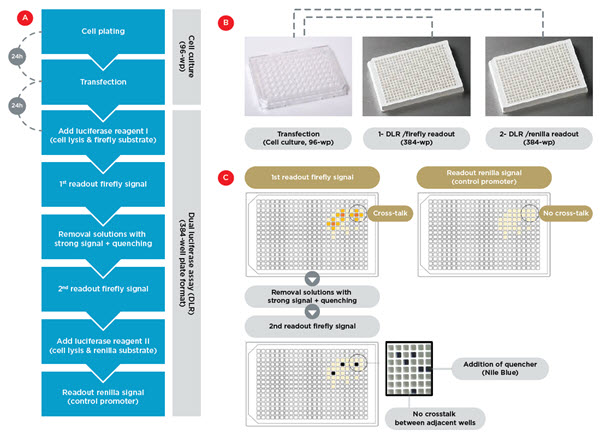 Figure 2. Assay workflow. A) Workflow for automated transfection in 96-wellplate format, followed by DLR assay in 384-well plate format. B) The transfection, lysis and cell detachement occurs in four cell culture 96-wellplates, followed by their splitting into two 384-well plates for separate readout of the firefly and renilla signals. C) Experimental strategy to eliminate crosstalk artifacts. Separating firefly and renilla readouts avoids crosstalk between the firefly and renilla luminescence light (the two upper panels). A second readout of the firefly signal after removal of the solution in wells with very strong signal eliminates the crosstalk between adjacent wells.

We found that, as expected, the use of a control promoter (Renilla signal) improves well-to-well reproducibility by a factor of 2 (Figures 3A and 3B), with a coefficient of variation (CV) between different wells < 10%. We also compared the normalized values of manual versus automated assays for promoter strengths distributed over as many as five orders of magnitude (Figure 3C and data not shown). The average CV decreased from 22% to 9%, demonstrating the significant advantages of automation. 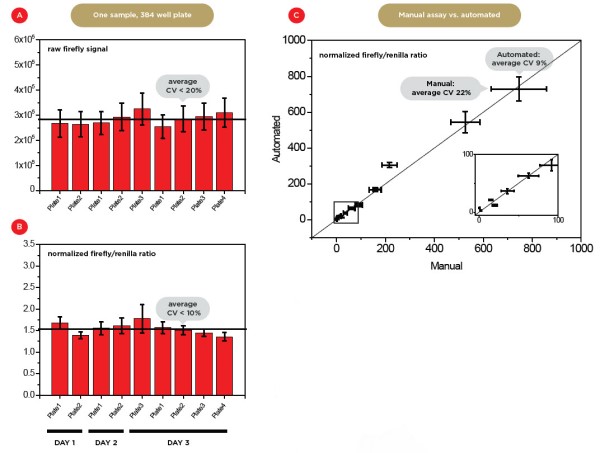 Figure 3. Assay reproducibility. A) Mean firefly raw luminescence signals for nine independent technical (same days) and biological (different days) replicates in 384-wp format. Each well arose from an independent transfection and contained the same experimental promoter with a weak expression level. B) Mean normalized expression level values. The average coefficient of variance (CV) decreases from ~20% to 10% after normalization. C) Comparison of normalized expression level values for manual versus automated sample preparation. The insert shows a magnification of the region highlighted with a black square. The expression levels of the 11 different experimental promoters tested covers a dynamic range of more than 3 orders of magnitude. The automated preparation leads to a much lower average CV (9%) for all promoters compared to manual preparation (22%).

In summary, we have shown that transferring a sensitive reporter gene assay to robotics using Biomek NXP workstations leads to substantially improved accuracy and reproducibility, in addition to higher throughput. Expression levels can be accurately determined over five orders of magnitude. The critical steps are to establish highly reproducible cell transfection, minimize luciferase substrate volume while maintaining high reproducibility, and eliminate artifacts due to the crosstalk between adjacent wells and between the two luciferase signals. The protocol was established using the DLR assay, but could easily be adapted to other common reporter systems such as fluorescence reporters.

Biomek Automated Workstations are not intended or validated for use in the diagnosis of disease or other conditions. Beckman Coulter Life Sciences genomic reagent kits are for research use only.

Oops. The page you wanted could not be found, so we brought you to something similar. If you still can't find what you want, try searching our site instead.